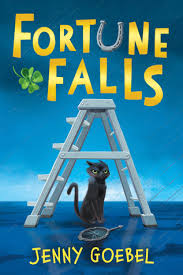 Welcome to Fortune Falls, a magical town where superstitions are real. Four-leaf clovers really do bring good fortune, and owning a rabbit’s foot is the secret to success. However, there aren’t enough charms in the universe to help Sadie Bleeker. She can’t pass a ladder without walking under it, and black cats won’t leave her alone. That’s because Sadie is an Unlucky. And things will only get worse as she gets older, which is why Unluckies are sent away at age twelve to protect those around them. Sadie can’t stand the thought of leaving home, so she and her friend, Cooper, devise a plan to reverse her bad luck. But when their scheme accidentally results in a broken mirror, the situation turns dire. Because for Sadie, seven years bad luck isn’t an inconvenience — it’s practically a death sentence. Can a girl who’s never so much as found a single lucky penny change her fortune? Or will she be forced to celebrate her twelfth birthday by saying farewell to everyone she loves?

Basically, it was pretty good I thought of a lot more good things about it than bad, and I really love Copper, like y’all should read it just for him. 😉 Have a good week everyone!